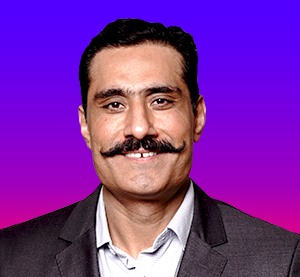 Sanjay Kotha is currently the Group Chief Information Officer (GCIO) for Adani Group, a diverse conglomerate with over $11 billion in annual revenues and operations spread over 70 locations across 50 countries. In his role as the GCIO, Sanjay vision is to bulk up digital capabilities and undertake technology initiatives to drive growth across the conglomerate that has businesses in resources, logistics, energy, agro, real estate, financial services, defense and aerospace sectors.

Prior to joining Adani Group, Sanjay was the CIO & SVP of Hindustan Coca Cola Beverages (HCCB) South Asia where he was responsible for leading the development, deployment and review of IT strategies across the business. During his 5 year stint with the soft drink major, Sanjay had been the architect of modern IT infrastructure at HCCB and enabled the transformation of HCCB into a digitally enabled, nimble footed, manufacturing and distribution Company.

Overall in a career spanning over 24 years, Sanjay has held multiple IT leadership positions and been an integral part of the growth stories for companies like Spice Telecom, Thomas Cook, Bharti Airtel, Bharti Retail, Walmart India and Bharti Airtel Africa.

During his stint as the CIO for Bharti Airtel Africa, Sanjay had been responsible for leading the development, deployment and review of IT strategies for 17 countries. He was instrumental in developing sustainability of the “Customer Smile” operations stability and tactical projects implemented to achieve a complete transformation program catering to regulatory and network constraints as also drive capabilities for product innovation and non-voice revenues. In addition, he was responsible to build sustainable interfaces with the Network team and with the SCM team for timely and cost-effective Data Centers.

An avid F1 fan and a fitness enthusiast, Sanjay loves speed and excellence.